Stones of Remembrance: The Post-College-Ish Years

This is the last in my series about my "Stones of Remembrance," the times that God has shown his faithfulness in big ways in my life.   (You can start with these: Part 1 Part 2)  Today I'm wrapping up the series.

After undergrad, some friends and I moved into the University Apartments, where we planned to live intentionally among the many international grad students in our complex.  My roommates and I joined a church plant together.  I started my master's in speech therapy.

Those three years were some of the richest in my life, filled with friends, laughter, and fun.  We celebrated Thanksgivings with friends from all over the world, our furniture sitting out on the grass because we had to move it out of our apartment to accommodate five tables of family-style dining.

I thought that if I made friends with people, God would somehow eventually wiggle His way into those friendships.  Actually, though, in spite of the richness of my friendships at that time, there were many people I was close to that I never actually shared God's story with.  (I am still guilty of this, frequently.  But I honestly believe that his is the most important story out there!)

A very practical way that God worked was by providing me an opportunity to take a class called Perspectives, which gave me a better foundation for what international ministry can look like, including the very practical advice to verbally share the gospel, rather than hoping that friendliness will independently lead people to the Lord.  That class also solidified my plan to go to China, rather than just "abroad," because I learned in that class about the geographic locations that have the least exposure to Jesus.

I didn't like having to raise my own support to teach in China.  Who wants to ask people for money?  But the God provided for my needs for three years through the generosity of friends, family, and churches.  Many of you are reading this here.  Thank you!  My experience with support-raising showed me that God was faithful even in a task that I did NOT want to do.

The above title is the name of a book, China's Christian Millions, that describes the growth of the church in China in the last several decades.  Briefly, with the establishment of the Communist government in 1949, foreign missionaries were expelled from the country, and China's tiny, fragile Christian population was left to fend for itself.  Watchers of China were shocked when China opened up in the seventies and eighties, as they found that the church had not only survived, but increased!  The rural house church movement grew in spite of significant persecution, especially in the early decades of the Party's governance.

Living for three years in China, I got to see this amazing phenomenon with my own eyes.

I saw it in my first month in China, attending a large registered church in the University district of Beijing, packed full of college students and young professionals lifting their voices in worship songs that I sing too.

I saw it in a conversation with a young Christian woman who believed that the Lord was sending her to the Middle East to share the Father's story with Muslims living there.  She told me, "China has so many people because God wants to use China."  I got goosebumps; I believed her.

I saw it in one of my local friends who was boldly sharing hope with others in her workplace, counseling them through depression and health problems, even as her own job situation was made more complicated by her faith.

I saw it last summer, when I visited China with my American friend, and we sat across the table from two college students who invited us into their morning quiet time.  We all silently read a chapter of John and then each shared an insight.  We prayed together, literally, with all four of our voices lifted at the same time.  They sang a hymn in Chinese.  My friend and I sang "Great is thy Faithfulness."  And then we sang a song together that all of us knew, before getting up from the table to go about our day.  (That hour still comes to mind frequently when I think about all the programming and hierarchy that we try to add to our American Bible studies, and wonder if it muddles the joy of just reading, singing, praying, and learning together.)

The privilege of worshiping God in China, where the unlikeliest of Christian movements has brought millions to salvation, reminded me that God is bigger than we give him credit for; that his arm is not too short to work, and that he is able to do "far above all we can ask or think" (Ephesians 3:20).

There were several things I prayed for when it was time to move back to America: a job in a city that had an international population and where I knew at least one person (and preferably in Iowa because Iowa is bomb), a household of Christian women to live with, and a church to join.

God provided all of these.  I know he doesn't always give us what we ask for.  But in that case, he did!  :)  He has led me through many transitions in the last ten years, and in each place he has provided what I need. 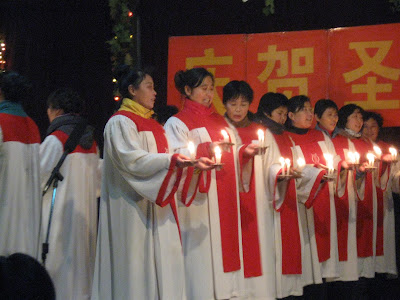 Well, the mosquitoes have just started nibbling on my face (I'm sitting on the front porch - where else?), so it's time to wrap this up.  Thanks so much for reading here.  What are YOUR stones of remembrance?
Posted by Alison at 8:26 PM

Email ThisBlogThis!Share to TwitterShare to FacebookShare to Pinterest
Labels: Faith