Misguided Missions: The Culprit is Me (...and You?)

The first time was a service trip to Belize in 2004. I went with a bunch of other American students and we did manual labor at a Mennonite School for the deaf in Belize. 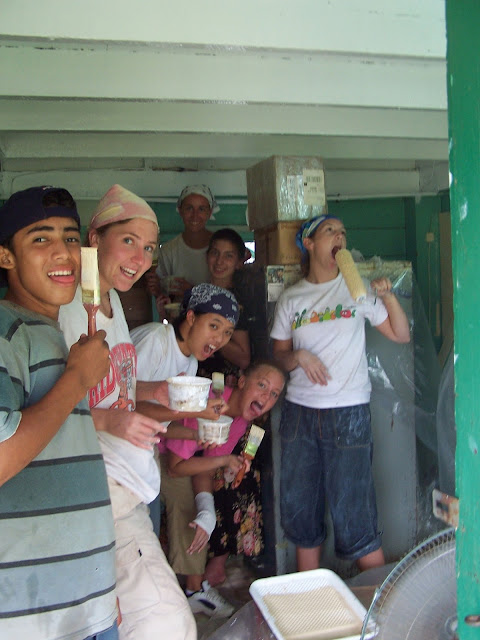 We painted stuff, planted stuff, replaced a roof, butchered some chickens, took side trips, washed dishes, ate ice cream, and generally had a blast. My team was amazing. We shared "family time" and worship every night; we were strangers who became friends in a day. The deaf students, the Mennonite workers, and other Belizean locals also felt like instant family to us.

It was one of the most magical months of my life, and it set into motion a desire to one day live abroad, at least for a year or two. Twelve years later, I still have friends from that trip. The school is still there, and some of the work that we did is still around, and other projects have been completed by a variety of American teams that have come since us.

In some ways, that trip got a lot of things wrong. Why raise $30,000 to send unskilled laborers to a nation that already has plenty of labor? Why send Christian workers to an ultra-Christian community?

A decade has passed, and now I would probably think twice about taking a trip that involves me "serving" people by crashing their lives for a few weeks with a paintbrush and a hammer. Nonetheless, I think the net effect of that trip in my own life was good, and I haven't yet heard that it was detrimental to the people we visited. (Phew.)

When I reflect on that trip to Belize, I'm reminded that the Lord can work through a trip that isn't perfectly designed.

The other trip that changed my life was this one: 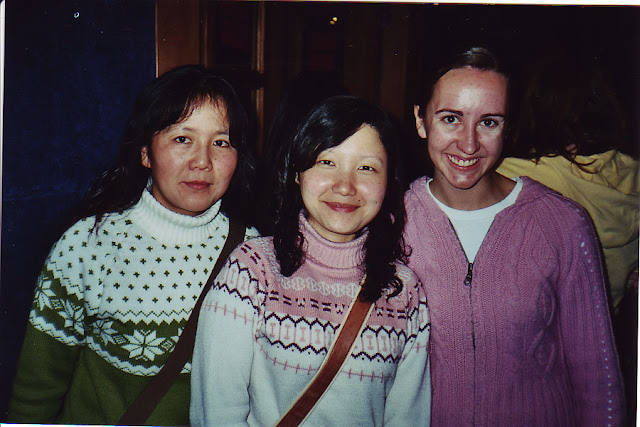 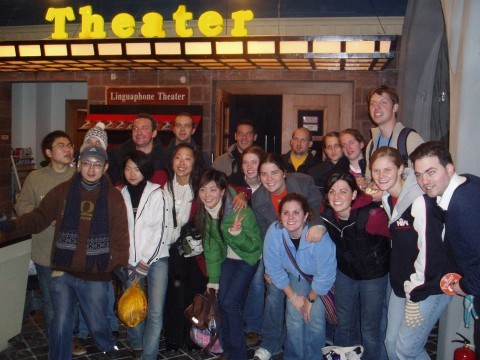 China 2006. It was a 10-day trip to a central Chinese city to help with an English program and partner with a year-long team. It was the catalyst for my later three-year stint as an English teacher and cross-cultural worker in China, as well as my last ten years of trying to be friends with every international person who will have me.

That China trip avoided many of the common problems of short-term trips. It was part of a multi-decade, healthy partnership between my local American church and that Chinese city. It brought a burst of energy and assistance to the English program and to the long-term team. And it wasn't a one-way relationship. The English program served us by hosting us and paying for our lunches, and we served them by repping their school and practicing English with their students.

The trip I regret was my visit to the Missionaries of Charity in Calcutta. 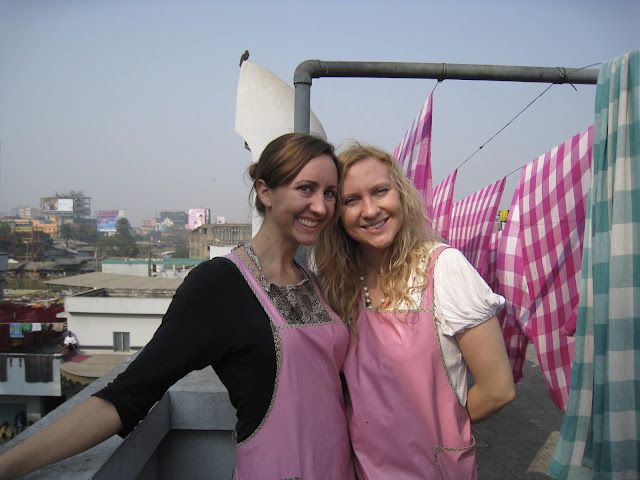 Here we are with the laundry that we hand-washed at one of the Missionaries of Charity houses, because there are no people who know how to wash clothes in India. Oh wait.

I've written about that trip on my old blog, and it remains one of my most-read and most-searched articles. People admire Mother Teresa (me too!).  They want a taste of what it's like to love the destitute like she did, and so they show up untrained and uncommitted and foist themselves on the people living in these houses (me too!), for however long they happen to be in Calcutta. Then they write about what a moving experience it was (me too!).

But in what way were those impoverished Indian women and children any better off for my having come? We couldn't communicate. I wasn't meeting any needs that the local church couldn't have met. I was just there to be part of the "poverty petting zoo," to have an interesting experience and pat my own back at the end.

Anyway, I was standing next to a Spanish woman who was talking about a beautiful experience she had in the House of the Dying. She was feeding a woman her lunch, and the woman just closed her eyes... and died.

And this Spanish woman was so moved; she had witnessed a soul leave this world. It was a peaceful moment, and she would never forget it.

But, as a speech pathologist trained in swallowing disorders, I couldn't help but wonder -- Was it possible that this untrained volunteer, feeding a very sick woman she'd never met, might have just fed her in such a way that she choked?

I started reading articles on the Missionaries of Charity and saw many criticisms of their methods, including their use of a revolving door of untrained foreign volunteers who really are doing nothing to help, and many times may actually be hurting.

It was my voluntourism in Calcutta that first helped me realize that there's such a thing as a bad short-term mission trip. It was selfish of me have gone.

I know many of my blog readers have supported me in my various trips over the years, and some have been on them! Others of you have gone on your own trips. Almost all of us will be asked to donate to trips like this, and have to choose what criteria we will use when we decide whether or not to give. I am so grateful for people who have supported me in the past, and grateful for enthusiastic, passionate Christians who want to serve others both here and abroad.

These days, I shy away from trips that mostly involve painting, hugging orphans, bringing supplies, or performing skits. I shy away from outreach efforts to places that already have many healthy churches. I try to use my money to support longer-term partnerships, sustainable ministries, and (whenever possible) to forward church-planting efforts in areas that have no church.

If you think about it, a local church ought to be able to do many of the things we now try to do as short-term visitors. They might need support, encouragement, partnership, or funds, but they might not need our presence.

I've love to know what you think. Have you gone on short-term trips? Were they healthy? Were they helpful? Any regrets or recommendations?

This is the third part in a short series on the evolution of my views on mission trips. With two million Americans going on short term missions yearly (according to shorttermmissions.com), it makes sense to evaluate whether these trips are worth the expense, and if their outcomes are generally good or generally bad. My intention here is to highlight the nuances I now see and give us all some questions to think about, not to criticize you, your church, my church, or my own self.

You make some very good points, and I agree with them, yet the question asked, "do they need our presence" leads me to answer: sometimes. I too have been on short term summer missional tourism. It had some very profound effects on me and on the churches we were helping yet I must admit there were some tourist excursions that I could argue either way if they were selfish or not. But getting back to my point...

A few years ago, my church partnered with sister churches in Bolivia for a mission trip. When I heard what was to happen, inwardly I judged thinking, "hmmph--some mission, some trip!" But when I heard the reports and read the messages from some of the believers from Bolivia afterward, I was struck by the thanks given for coming that distance to encourage them--to remind them that they are not alone as believers. It seemed less like a 'missionary' trip and more like a hospitality trip. The presence of North American believers helped them feel more closely tied to the church global than they had previously been feeling. The results today are unknown to me, but I have not forgotten the encouragement that took place between our churches that summer.

Well said. You bring up a point that is missing from my blog series, which is the encouragement that believers get from fellowship with other believers. I can think of many sweet times spent with believers from other countries in which, despite all of our differences, it was so clear we were from the same family, had the same Father, and were on the same team.

Also missing from my blog series is the necessity of submitting our plans to the Lord and allowing his Spirit to guide these efforts. Discernment and direction are needed; I am only JUST starting to learn that.

Hopped over from Velvet Ashes and I think it's a great post.. Short term mission trips also changed my life and I've learned more or less the same lessons.. I come from South Africa and most of my the trips involved going to other African countries but I think the principals are basically the same everywhere..

We ended up living in Asia and I'm volunteering three days a week at a local Buddhist orphanage which originated from the big Tsunami in 2004. We still get a lot of volunteers and visitors to the area and the orphanage is dependent on foreign aid with a humanitarian approach.

I could probably write a whole post full of observations but it all comes down to the realization that we all need Jesus.. going, sending, giving and doing all kinds of 'good' may help us feel better about ourselves for a while but at the end of the day it is all meaningless if doesn't draw us and others closer to Him..

I like the idea of supporting the local churches and empowering them and the long term missionaries instead. I look forward to reading more of your writing ;)

Hi Dorette! Thanks for coming over to read and comment!

I love your point that we really do all need Jesus. The tendency toward paternalism, including spiritual paternalism, is one of the possible negative effects of short-term trips on the go-ers. (Which I just learned in the book "When Helping Hurts" - a great read on this subject!)

It's interesting that you mention you're from South Africa. About a week ago I went to a wonderful church service at a church in Chicago that had been planted by a church in South Africa. In the same week, I received a request to send donations with an American church team to take with them on a short-term trip to South Africa.

Now, if the South African church is vibrant enough to be planting healthy churches in my own country, are they not vibrant enough to care for the schoolchildren in their own cities? I'm not saying I know the answer to this question necessarily, but it at least points to a need for greater emphasis on PARTNERSHIP rather than PATERNALISM in places where a local church is already thriving. I'd love to hear your thoughts.