Thanks for reading my series on "Misguided Missions," in which I explored the potentially harmful ways in which American churchgoers try to help others.

When I wrote that series, I hadn't yet finished this book: 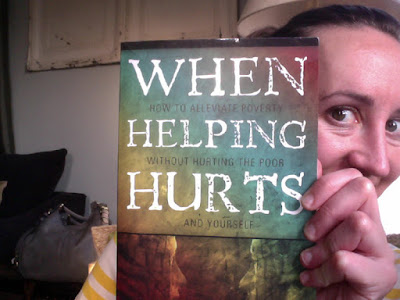 Wow. I highly, highly recommend When Helping Hurts. Please pick up the book for a thorough treatment of "how to alleviate poverty without hurting the poor... and yourself" (as the subtitle says).

Let me summarize a few of the points that helped me most.

The authors interviewed North American audiences and found that most defined poverty in terms of material lack, while poor people worldwide tend to describe not only material lack but also psychological and social lack:


Poor people typically talk in terms of shame, inferiority, powerlessness, humiliation, fear, hopelessness, depression, social isolation, and voicelessness. North American audiences tend to emphasize the lack of material things such as food, money, clean water, medicine, housing, etc. ... This mismatch between many outsiders' perceptions of poverty and the perceptions of poor people themselves can have devastating consequences for poverty-alleviation efforts (p. 53).

If we define poverty only as a lack of money, we will try to solve the problem by giving money. It really matters how we diagnose the problem, because the wrong diagnosis will lead to the wrong solutions.

The authors instead invite us to view poverty through the lens of the four basic relationships of every individual and society:

Poverty (of any sort - spiritual, relational, or material) is rooted in brokenness in one or more of these foundational relationships. Read the following example from the book and note the brokenness of each of Mary's relationships (to self, others, creation, and God):

Consider Mary, who lives in a slum in western Kenya. As a female in a male-dominated society, Mary has been subjected to polygamy, to regular physical and verbal abuse from her husband, to fewer years of schooling than males, and to an entire cultural system that tells her she is inferior. As a result, Mary has a poverty of being and lacks the confidence to look for a job, leading her into material poverty.

Desperate, Mary decides to be self-employed, but needs a loan to get her business started. Unfortunately, her poverty of community rears its ugly head, as the local loan shark exploits Mary, demanding an interest rate of 300 percent on her loan of twenty-five dollars, contributing to Mary's material poverty. Having no other options, Mary borrows from the loan shark and starts a business of selling homemade charcoal in the local market, along with hundreds of others just like her. The market is glutted with charcoal sellers, which keeps the prices very low. But it never even occurs to Mary to sell something else, because she does not understand that she has been given the creativity and capacity to have dominion over creation. In other words, her poverty of stewardship locks her into an unprofitable business, further contributing to her material poverty.

Frustrated by her entire situation, Mary goes to the traditional healer (witch doctor) for help, a manifestation of her poverty of spiritual intimacy with the one true God. The healer tells Mary that her difficult life is a result of angry ancestral spirits that need to be appeased through the sacrificing of a bull, a sacrifice that costs Mary a substantial amount of money and further contributes to her material poverty. Mary is suffering from not having sufficient income, but her problems cannot be solved by giving her more money or other material resources, for such things are insufficient to heal the brokenness of her four foundational relationships. (pp. 63-64)

Man, that's a long quote, but so good. I wish I could just quote you the whole book! But anyway, the point is that our definition of poverty matters, and we must define it holistically in order to implement solutions that help.

At the heart of it, the fall of man in Genesis 3 threw all of our relationships out of whack. It is Jesus who reconciles and restores our fundamental relationships, which the authors note:

As the book title says, our efforts to help may result in harm, not only to the recipients of our good intentions, but also to ourselves.

One way this happens is when our charitable efforts give us a kind of "god complex," which contributes to our own poverty as it disrupts our fundamental relationships with self and with God, while at the same time contributing to the "poverty of being" of the poor, as our charitable efforts increase their feelings of inferiority, shame, or helplessness.

The authors state that, "one of the major premises of the book is that until we embrace our mutual brokenness, our work with low-income people is likely to do far more harm than good" (p. 64).

They go on to reference development practitioner Jayakumar Christian, who believes that "the economically rich often have 'god-complexes', a subtle and unconscious sense of superiority in which they believe they have achieved their wealth through their own efforts and have been anointed to decide what is best for low-income people, whom they view as inferior to themselves" (p. 65)

What I gained from this reminder is that I absolutely shouldn't engage in any charitable or "helping" work in order to make myself feel good. This contributes to my own poverty of being and may contribute to the poverty of being of others too.

Part Three of the book covers practical strategies, including a section on "Doing Short-Term Missions Without Doing Long-Term Harm."

There are some good reminders there about RELIEF, REHABILITATION, and DEVELOPMENT.  Relief (e.g. one-way giving, doing things for people rather than with people) is appropriate only in the aftermath of a major catastrophe. We shouldn't apply relief when development is needed, and even then we shouldn't assume that short-term mission teams are necessarily the best people to apply relief aid.

The authors give many suggestions for improving the impact of short-term teams, and I will summarize the majority of them here (from pp. 174-179):
That's a tall order. I wonder how many of you have been on a trip designed according to the above principles? I'd love to hear.

I was encouraged to find many practical ways to help the poor while reading the third part of this book. It's not all doom and gloom! While the point of my original blog series was primarily to discuss short-term missions, the book also provides a very helpful framework for long-term development. For example, they discuss ABCD - "Asset Based Community Development" and how powerful it is to start development efforts not by focusing on what's missing in a community, but by capitalizing on the resources and strengths that are already present.

Let me close with an article I came across recently:

The article suggests that the world's billionaires alone could give enough money to poor countries to draw millions of people over the poverty line. It cites a recent study which "manages to put into perspective what one person, or what a group of people, could accomplish in a concerted effort to help the world's impoverished. The combined efforts of all the billionaires in the Philippines, India, Swaziland, Georgia, Indonesia, Colombia, Brazil, Peru and China would completely eradicate extreme poverty in their respective countries."

How would you re-write that quote according to the principles from When Helping Hurts? Here's my best shot:


The combined efforts of all the billionaires in the Philippines, India, Swaziland, Georgia, Indonesia, Colombia, Brazil, Peru and China could temporarily eradicate extreme material poverty in their respective countries, while potentially worsening the poverty of being of the material poor by creating a relationship of dependency with the billionaire, contributing to their feelings of helplessness and inferiority, and removing their initiative to steward the gifts and resources around them. The billionaires would meanwhile risk inflating their own feelings of superiority, furthering their broken relationships with self, others, and God. The end result may be that everyone's fundamental relationships remain broken, which will likely lead the formerly impoverished recipients back into material poverty when the original monetary donation runs out.

As always, I'd love to hear your thoughts, both on short-term missions and on the wider question of how Christians and non-Christians can best respond to the needs of those around us. (And don't forget to check out the book!)
Posted by Alison at 6:28 PM

This is incredible!!! I just came across your FB post & I love this book! So eye opening! I love your quote at the end! Thank you for sharing!

Meredith! Hi! Thanks for coming over to read and comment. Glad to find another fan of this book. :)