An Open Letter to Donald Trump

This week you won the United States Presidential election and are now poised to be my President for the next four years.

Romans 13:1 says, "Let everyone be subject to the governing authorities, for there is no authority except that which God has established." I did not support your candidacy, but I am now under your authority, and I intend to follow you in all that is right and good. Many who formerly opposed you have publicly offered you their prayers and support as you now take on one of the hardest jobs in the world. That is also right and good.

However, I don't think our obligation to be subject to you in all that is right and good removes your own accountability for everything that you have said and done over the last year. You have wronged millions of people, sometimes by picking public fights with individuals and sometimes by insulting whole groups and sometimes by hurting the country as a whole by not taking seriously the importance of this office.

As you prepare to assume the title of President, you could do a lot of good by first trying to right these wrongs. You are in position of incredible influence; using your influence at this important moment could help set our country on a kinder, more rational, more stable course. I'm asking for an apology.

Please apologize to your personal opponents. Here are some of the things you said to other Republican politicians (gathered from The NY Times' Complete List of the 282 People, Places, and Things you insulted on Twitter):

Everybody is laughing at Jeb Bush-spent $100 million and is at bottom of pack. A pathetic figure!

Our very weak and ineffective leader, Paul Ryan, had a bad conference call where his members went wild at his disloyalty.

@MittRomney was a disaster candidate who had no guts and choked! Romney is a total joke, and everyone knows it!

These are members of your own party that you called "pathetic," "weak," "ineffective," "disloyal," "disaster," "gutless," and "a total joke." You also insulted and mistreated your Democrat opponents, going so far as to jokingly suggest someone should shoot Hillary Clinton (“If she gets to pick her judges, nothing you can do, folks, Although the Second Amendment people — maybe there is, I don’t know.”) (source)

Your callous, reckless meanness toward your opponents set the tone for your supporters. The New York Times recorded supporters at your rallies shouting things like, "Trump that B****," "Kill Hillary," and "Hillary is a whore!" You may watch the video to see and hear more. The Times noted:

But what struck us was the frequency with which some Trump supporters use coarse, vitriolic, even violent language — in the epithets they shout and chant, the signs they carry, the T-shirts they wear — a pattern not seen in connection with any other recent political candidate, in any party.

Surely you knew that your supporters have been behaving this way, and many feel like they are just following your example. An apology from you would send a clear message that the way to do politics is not to publicly insult and bully people, and certainly not to suggest that your opponents be shot. Please issue an apology, something like this: "I'm sorry for the way I treated my personal opponents. What I said and what I did wasn't right. And I call on my supporters to join me in engaging our opponents with kindness and respect."

Please apologize to women, Mexican immigrants, Muslims, refugees, and veterans, and other groups you repeatedly wronged or misrepresented.

Your wrongs against these groups are so well documented that I won't explain them in detail, but here are a few examples.

Multiple women have accused you of sexual assault. The Atlantic summarized them: (source)


Even before the release of a 2005 video in which he boasted about sexually assaulting women—“Grab them by the pussy. You can do anything,” he said, as well as “I just start kissing them. It’s like a magnet. Just kiss. I don’t even wait. And when you’re a star they let you do it. You can do anything”—there’s a long line of allegations against Trump. Jill Harth says Trump assaulted her in the 1990s. Trump’s ex-wife Ivana Trump once suggested he had raped her, though she has since recanted her story. Former Miss Utah Temple Taggart said he kissed her on the lips inappropriately. But since the release, more women have come forward. Two told The New York Times that Trump had assaulted them, one saying he tried to put his hand up her skirt on a flight in the 1970s and another saying he forcibly kissed her. A Florida woman says Trump groped her. A former People reporter recounted an alleged assault at his Mar-a-Lago debate, and says he told her, “You know we’re going to have an affair, don’t you?” Several former teen pageant contestants said Trump walked in on them while they were naked or partially dressed.

You owe each of these women a personal apology if any of those accusations were true, and you owe every woman on earth an apology for stating that "no one respects women more than you do" in the face of multiple accusations of sexual assault, your own boasts about extramarital conquests, and your frequent comments (either lecherous or insulting) about women's appearances. You are responsible for the fact that you now have supporters yelling "grab her by the p****" in multiple accounts since your election. (Here's one.)

An apology from you would go a long way toward re-establishing the expectation that women should be respected in this country; that they should neither be assaulted nor insulted, and that you as a leader will not tolerate such behavior in your supporters.  You could say something like, "I am sorry for bragging about groping women and pursuing extramarital affairs. [If true], I am extremely sorry that I touched women sexually without their consent, which is not only wrong but also illegal. I am sorry that I excused myself rather than humbly apologizing when I wronged women and girls, but at this point I do repent and by God's grace will be a one-woman man from now on, one who treats all women with respectful words and actions. I expect no less from my countrymen."

Please apologize to Mexican and Muslim immigrants. You began your campaign by saying, “When Mexico sends its people, they’re not sending their best. ... They’re sending people that have lots of problems, and they’re bringing those problems with us. They’re bringing drugs. They’re bringing crime. They’re rapists. And some, I assume, are good people.” (source) The fear and hatred you have stirred up against immigrants, and especially Mexican and Muslim immigrants, is the reason some children today walked into schools where their classmates were chanting "build that wall". It's the reason some Muslim women are now expressing fear about wearing hijabs in America (source).

We are a country founded on principles of religious freedom and made great by immigrants.  Mr. Trump, please don't lead us to be afraid of outsiders, and please don't lead us to be afraid of openly practicing our religions. An apology from you on this count would go a long way toward helping unite Americans of all backgrounds under your leadership, such that they can feel that you are their leader too, equally ready to support and defend a Mexican American or a Muslim American as you are an Anglo-Saxon American.


Please also condemn every instance of violence or racial intimidation carried out in your name. Your supporters need to know that President Trump will not tolerate his people scrawling racial slurs on black Americans' cars or telling people of color that it's time to go home. You can start by condemning each instance of hateful speech or actions collected in the Twitter account Day 1 in Trump's America. (Warning: vulgar language and disturbing images).

Finally, please apologize to us all for failing to take the Presidency seriously, and please give us your pledge that you will do your best to make honest statements and informed decisions.

You have just taken a position of extreme power and influence, and this comes with great responsibility. You now have the most powerful military in the world under your command. You can imagine that it gives Americans no great sense of confidence when you make statements such as, "I’m speaking with myself, number one, because I have a very good brain and I’ve said a lot of things…my primary consultant is myself.” (source)

You claimed to know more than the generals about ISIS. You admit no personal weakness, and yet your statements on both domestic and foreign policy have frequently revealed ignorance, inconsistency, and recklessness. (For example, you called for our military to use torture or war crimes, such as killing the families of suspected terrorists). (source)

When you don't know the facts, you have often invented them. Toronto Star's Daniel Dale has been fact-checking your public statements and found many of them can be verified as untrue (20-37 times a day). As an example, on October 25, 2016, he caught you in 35 lies: 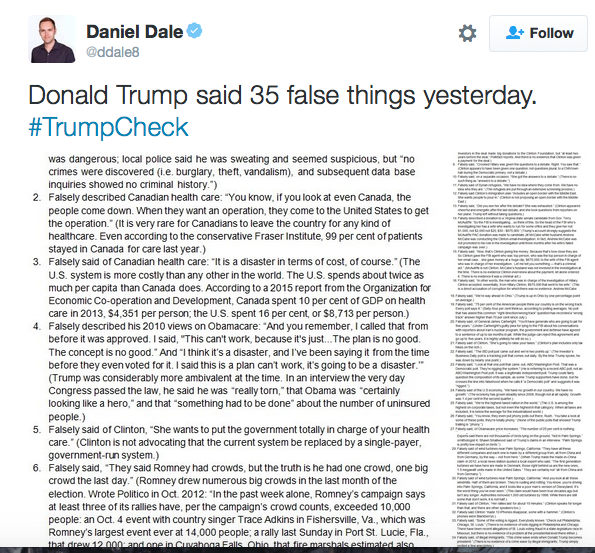 Please, for the sake of our country and our world, stop making things up and start learning the information and skills you will need for your new job. If you don't know something, admit it and find out from someone who does. If you make a mistake, admit it and do better next time. These are basic expectations for any job, and in the case of the Presidency, many lives depend on you making an honest effort to do your very best.

Please apologize for your flippancy up until now, and give us your word that you intend to do right by America and the world.

This letter is not intended to be a mud-slinging session, but instead a reminder that all of your actions and words still hang in the air now that the election is over. They have already started to affect our national climate and our reputation abroad, but some of that damage is reversible if you take responsibility and sincerely apologize.

You will have many challenges in the upcoming years, and I pray that you will have grace and wisdom to meet them well. Knowing that "God opposes the proud and gives grace to the humble" (James 4:6), I ask you to humbly apologize and try to right the wrongs that stand to do so much damage to our great nation.

I personally would be very glad to follow a man who leads not by shows of power but by wisdom, knowledge, humility, and love. I believe that you can become a leader like that, and I pray that by God's grace you will.

This election season felt like a civil war, so Lincoln's words from the Second Inaugural Address seem somehow fitting here:


With malice toward none, with charity for all, with firmness in the right as God gives us to see the right, let us strive on to finish the work we are in, to bind up the nation's wounds, to care for him who shall have borne the battle and for his widow and his orphan, to do all which may achieve and cherish a just and lasting peace among ourselves and with all nations

I am ready to stand with you in all that is right, and I look forward to doing all that we can together to achieve a just and lasting peace, here in America and with all nations.