The Syrian Stories: Anne Frank Today is a Syrian Girl

I went to a city near the Syrian border in September. We spent a week learning and partnering with a local church that has been faithfully reaching out to Syrian refugees since they first started coming to their city about six years ago.

More than 250,000 Syrians have died in the civil war and another 11 million have been displaced. You may find the BBC's "Story of the Conflict" helpful as a quick summary of the war, although please note that almost a year has passed since that was published and the situation has arguably worsened since then.

Several months ago I read Nicholas Kristof's April 2016 New York Times article titled "Anne Frank Today is a Syrian Girl." (Photo and caption below are from the article). 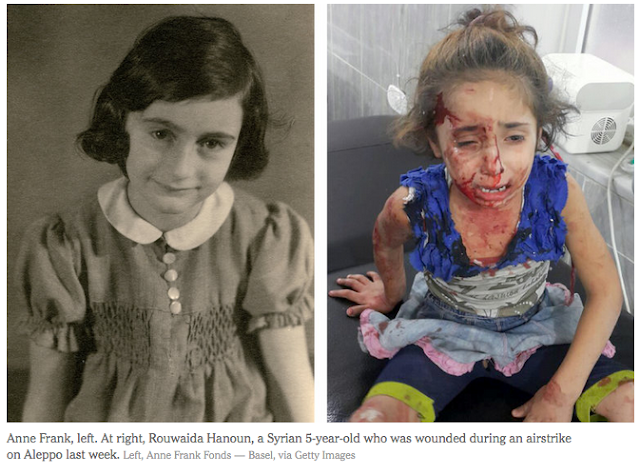 As is Syria today, Germany of the 1940's was a place of great peril and brutality for many ordinary citizens. Anne Frank's father, Otto Frank, wrote to an American friend to seek refuge for his family in America. He wrote, “U.S.A. is the only country we could go to. It is for the sake of the children mainly.”

The article notes that this was not his only request for assistance in emigrating:

Along with the letter were many others by Otto Frank, frantically seeking help to flee Nazi persecution and obtain a visa to America, Britain or Cuba — but getting nowhere because of global indifference to Jewish refugees.

We all know that the Frank children were murdered by the Nazis, but what is less known is the way Anne’s fate was sealed by a callous fear of refugees, among the world’s most desperate people.


What prevented the Frank family from finding safety in America instead of finding murder in a concentration camp? One factor was American self-protectionism. To again quote the Kristof article at length:


There were widespread fears that Germany would infiltrate the U.S. with spies and saboteurs under the cover that they were Jewish refugees.

“When the safety of the country is imperiled, it seems fully justifiable to resolve any possible doubts in favor of the country, rather than in favor of the aliens,” the State Department instructed in 1941. The New York Times in 1938 quoted the granddaughter of President Ulysses S. Grant warning about “so-called Jewish refugees” and hinting that they were Communists “coming to this country to join the ranks of those who hate our institutions and want to overthrow them.”

News organizations didn’t do enough to humanize refugees and instead, tragically, helped spread xenophobia. The Times published a front-page article about the risks of Jews becoming Nazi spies, and The Washington Post published an editorial thanking the State Department for keeping out Nazis posing as refugees.

In this political environment, officials and politicians lost all humanity.


It all sounds sickeningly familiar.

I've been to a border town near Syria. I've sat with the Anne Franks of today, and their mothers, fathers, sisters, brothers, and infant siblings. I've watched in awe as the Lord demonstrated his faithfulness by meeting their needs in miraculous ways.

And I want you to have a chance to hear some of their stories. In the next week, I'll be posting a series called "The Syrian Stories," in which I share a few stories from our visits to the homes of refugees.

The UN High Commissioner for Refugees said in May, “Syria is the biggest humanitarian and refugee crisis of our time, a continuing cause of suffering for millions which should be garnering a groundswell of support around the world." (source).

As I see it, the rest of us have an opportunity to follow in the footsteps of our Holocaust era heroes.

If today's Anne Frank is a Syrian girl, I want to be today's Miep Gies, who helped the Frank family into hiding and helped tell their story by saving Anne's diary.

I want to be today's Corrie Ten Boom, whose family sheltered Jews in their home until they themselves were sent concentration camps for the crime of giving refuge to desperate citizens.

I want to be today's Dietrich Bonheffer, who was imprisoned and later executed for his opposition to Hitler's cruelties.

And I want us to do it together. Stay tuned.


This is the first in a short series on my time in the Middle East visiting Syrian refugee families. Read the rest here:
Part 2: Small House, Big Hope
Part 3: The Second Household
Part 4: Vignettes