Our time with Syrian families began to run together more with each home visit. We went to two or three homes a day, always with a long-term volunteer and always long enough to drink a tiny cup of the world's blackest coffee or a little glass of the world's sweetest tea.

There were children in every home, and pregnant mothers too. One mother was eight months pregnant and desperate to find payment for a C-section as she had been told that this would be necessary due to having her previous child delivered by C-section back in Syria. She was told it would cost around $1100. The church does not pay for medical expenses for the refugees, as the need is very great and the requests are constant. Apparently some registered refugees had been able to receive subsidized medical treatment at the local hospital through the UN, but this too had stopped.

During our week, we heard and witnessed stories of miraculous healings through prayer in Jesus' name.  We praised God that He is meeting medical needs directly in some cases, rather than through the hands of doctors or the work of medications, as these are all difficult for refugees to access and afford.

One afternoon we took a cab to the outskirts of town. The pregnant mom there requested prayers for her high blood pressure to go down. She was several months along and had a four-year-old, a two-year-old, and a one-year old. All were girls. Could we pray for them to have a boy so they could be done, she asked? They served us sweet tea and candy; the girls ate up the candy and the couple described how difficult it was to make ends meet on the ~$15 a month they received from the UN for each family member. It's hard to imagine how that would last, given that the diapers we brought them cost $11 and it would take them a $2 cab ride into town just to by $.75 of bread.

But some families seemed to have some money, although I never could figure out how. I know that we sat in some large living rooms, and some had shelves or decorations in addition to the ever-present floor mattresses and TV.

We met one family who had been approved to resettle in America. They were awaiting their marching orders. The young wife showed me how she was learning English on her DuoLingo app and the boys were running around like crazy while their father smoked in the corner and chatted with the men on our visit. The church volunteers had encouraged them to continue with the resettlement process to go to America when, several months before, she had resisted the opportunity in fear that they would be forced to learn a different religion in schools. It seemed to me unfair that so many were desperate to be resettled (in America or elsewhere) but had not been given the opportunity, and yet this young family had to be talked into it.

In one home, the patriarch lamented the good years he used to have and the success he once enjoyed. All his prosperity had vanished with the war. The church volunteer told him the story of Job and then quoted God's promise in Joel 2:25: "I will restore to you the years that the swarming locust has eaten."

May it be so for Syrians, for Syria, and for all who have lost so much in this terrible war. 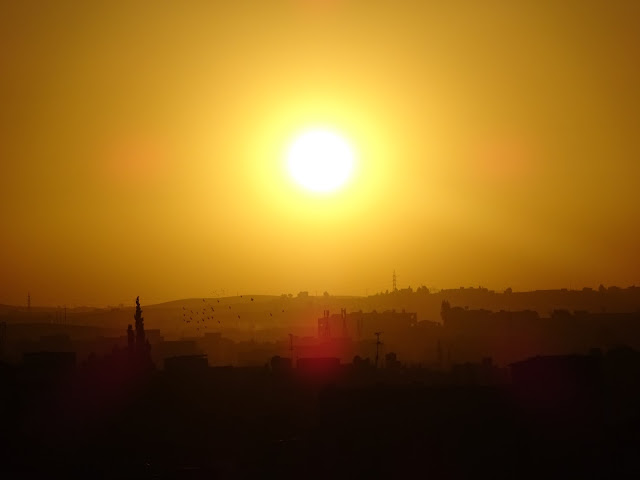 This is the last in a short series on my time in the Middle East visiting Syrian refugee families. Read the rest here:
Part 1: Anne Frank Today is a Syrian Girl
Part 2: Small House, Big Hope
Part 3: The Second Household
Posted by Alison at 9:36 PM

I really enjoyed your stories from the refugee camp. The anecdote about the woman fearing assimilation with western culture is quite striking in the context of her situation, but confirms what we see every day. The practice of welcoming large waves of devout Muslims into Western countries is an unprecedented experiment and has had very mixed results (to put it nicely) in Europe. While I know you adhere to a strict needs-based heuristic on the immigration issue, I hope you would grant that other compassionate people can reasonably see it as more complicated than that. Rather than asking why we aren't resettling more in the USA, maybe the question should be framed, are we doing enough to help the refugees where they are? Instead of asking "how can we use our military to defeat ISIS" maybe we should be asking, if we stirred things up by meddling over there in the first place, what makes us qualified to solve their problems this time? It's just a tough situation, a huge spiritual battle... but I know we can agree that any approach that de-humanizes the victims would be hugely lacking.

Thanks for the comment. I agree that large influxes of Muslim immigrants does not improve Western countries. This is the risk we take with admitting Muslims, but I think 1) it's worth the risk (for the Gospel and for the sake of showing mercy) and 2) this risk is mitigated if Western countries share the burden. If we spread out the admittance of Muslims, particularly for Muslim refugees, the social cost is lessened. As you mentioned, we do have obligations in this crisis given that we started two de-stabilizing wars in the Middle East that may have contributed to some of what we see now in Syria and Iraq. And yes, I do agree that compassionate people can disagree on this issue, although I hope I haven't given the impression that I see it as an uncomplicated issue. Thanks for the comments.

As to the lack of assimilation on the part of Muslim migrants, I would point Christians to "Seeking Allah, Finding Jesus" by Nabeel Qareshi. He talks about how his own conversion (and eventual assimilation) could not have been possible without Americans reaching out to him. There are so many barriers for them to reach out to us; I think we can help a lot by being the first ones to assertively pursue friendship with neighbors unlike ourselves.