[In the Style of Dave Barry] Night at the Caucuses

Hey Mr. Barry, I've been a fan of your writing since way back in 2000, when you published the following memory trick for spelling the word "millennium":

I use that trick to this day, and I'm proud to report that no one in the last sixteen years has ever had reason to call me a big fat stupid hen.

So you've helped me a lot, Mr. Barry, and I was thrilled to see that you were coming to my town last week to cover the Iowa caucuses.

"Finally!" I said to myself. "Here's a hard-hitting, truth-telling reporter who won't stoop to the same old tired jokes about pigs and corn."

Not only do you "poke fun" at our agricultural events, in another column you make frequent references to how well-mannered Iowans are, suggesting in your "tongue-in-cheek" way that we wouldn't last a minute in South Florida. (Key quote: "They are incredibly polite, these Iowans. If they ever come to Miami they will wind up naked in the gutter.")

Enough is enough, Mr. Barry. We Iowans are made of more than just corn, pigs, and politeness. For example, did you forget that we are also a leading producer of soy beans?

True story: My co-worker Kelsee, who grew up in small-town Iowa, surrounded by bean fields, did not realize until she was an adult that those fields contained soy beans. She had spent her whole life wondering who was buying all those green beans.

As this true story illustrates, we are not all farmers. In fact, I am an Iowa native whose primary agricultural achievement is telling people that my mom grew up on a dairy farm.

But putting agriculture aside, what really irked me about your coverage of caucus week, Mr. Barry, is your insistence that we Iowans are all nice.

Anyway, to prove that we Iowans have just as much "edge" as anyone else, and could beat any one of you in a street fight in the inner city (if only we had inner cities) (which would require having cities), I'm going to tell you about a night that Iowans weren't so nice.

I arrived with my two friends to a local elementary school, where at least fifty people were lined up outside the door. The caucus was set to begin in twenty minutes, and it was becoming clear that the line was not moving nearly fast enough to get everyone settled by 7:00 p.m.

After a few minutes, a volunteer poked her head out to the door to announce that the line for the Democrat caucus was actually inside the building, and dozens of people streamed out of the line and into the warm indoors.

Unfortunately, the caucus organizers had vastly underestimated the projected attendance, and they had run out of all the necessary forms, including registration forms and the little ballots that would be used to cast our votes. Someone was supposed to get photocopies, but it sure wasn't happening quickly.

Once we finally got everyone into the gym, we expressed our strong disapproval of slow line and the late start by stating they really should have planned ahead better, after which we continued our silent protest by making small talk with our neighbors and catching up with friends from church.

The organizers had set up chairs for only about a quarter of the attendees, forcing most of us to stand. 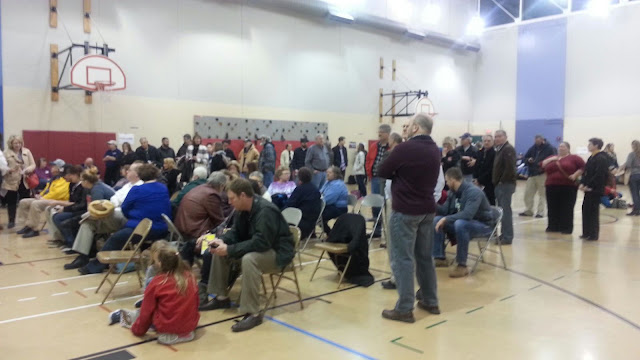 As you can see, we were fuming.

The climax of our Not-so-Niceness came shortly after, once the caucus had finally begun.

Several well-spoken representatives stood up to speak in support of their candidates. We showed our disapproval of the candidates we didn't like by smiling and clapping with one percent less enthusiasm than we gave for the candidates we liked.

When it became clear that no one had come prepared to speak on behalf of Donald Trump, a very nice suburban-type woman in a Trump T-shirt stood up and said that she hadn't planned to talk but she wanted to make sure someone spoke for Trump, because he was against politics as usual and he was doing all of this for us -- to help our families and to Make America Great Again. Listening to her talk, you would have thought Trump was a proper presidential candidate instead of a condescending egomaniac bent on self-aggrandizement at anyone's expense.

Anyway, several small children had been playing in the back of the gym throughout the evening. With the terrible acoustics of the gym, the adults were having difficulty hearing the speakers. It didn't help that three of the kids had noisemakers. ("What'll we have the kids do at the caucus to keep 'em busy?" I imagined their parents asking themselves. "I know! How about make noise? Bob, hand 'em the drumsticks.")

Finally, we could stand it no longer. A middle-aged woman in a Rand Paul shirt stood up halfway out of her chair and called over her shoulder, "Someone leash the kids!"

And there you have it: A true Iowa Rage.

The rest of the evening was uneventful. We took the vote (Rubio won; Trump trailed him by a vote), said goodbye to our neighbors, and all went home.

I hope you'll come back to Iowa one day, Mr. Barry, so we can show you what we're really made of.

But don't forget -- you'll have to pass the Manners Test before you come.

Email ThisBlogThis!Share to TwitterShare to FacebookShare to Pinterest
Labels: Humor, In the Style of...