Speechless, with a Side of Siblings

Helloooooo my lovely blog readers. It's been too long since I've written to you!

Lately I've been busy and a little speechless.

Yes. I am a speechless-language-pathologist.

I'm speechless about being single, because it's been a few months since I've technically been single. And while it was lots of fun to joke around about being single and poke fun at myself for my #reallifeinthetrenches, I have no desire to poke fun at an actual real relationship with an actual real person. The upshot is that I'm a very happy but slightly less funny blogger.

I'm speechless about my family because I already got all crochety on here about how I won't be sharing about my niephews much because their privacy matters too. I suppose I could blog about my adult family members, though. (You guys wanna do something hilarious real quick so I can write about it?)

I'm speechless about my upcoming short-term trip to the Middle East because I still haven't figured out how or how much to share on such a public forum. I'm looking forward to telling stories when I return, and if there's a way to do it without breaching anyone's security, I'll share generally here. In the meantime, check out OUR TRIP WEBSITE for more details.

(For those of you wondering why I'm going on a short-term trip when I already got all crochety on here about how they often do more harm than good, I'd be glad to give more detail in person about how we are trying to avoid any avoidable pitfalls of short-term trips.)

I'm speechless that DONALD TRUMP is apparently a viable candidate for President of anything, much less the country I live in and would like to be proud of. This is an absolutely discouraging season in American politics, and it's hard to know what to say because everyone's mind seems so unchangeable. I might still try. :)  (Please don't vote for Trump, if for no other reason than that he seems like the most likely candidate to say something that will get us all bombed.)

Anyway, since I'm claiming to be speechless, I will stop talking and share with you some gems my sister uncovered recently in our childhood home.

When you see this picture, what do you think? 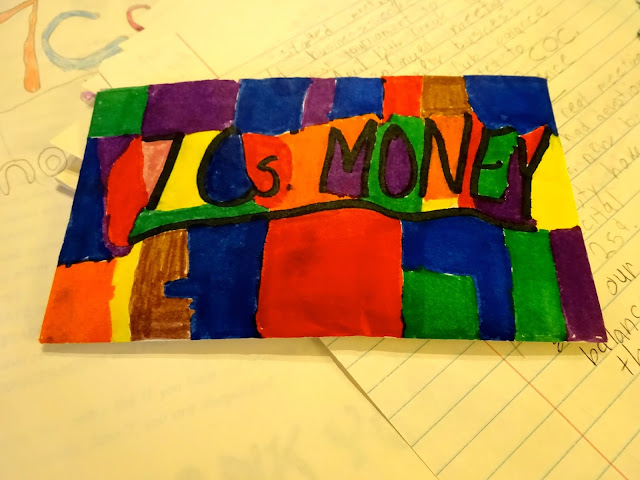 Simple! Travel back to the 1990s and join the 7Cs, a philanthropic club consisting of me and my sister, also known as Kids of Service or the Emily Jo Larry Corporation.  Your duties will be simple:

1) Attend club meetings. You'll notice this meeting started at 1:26 and ended at 4:27, but it appears about 90 minutes of that was lunch. 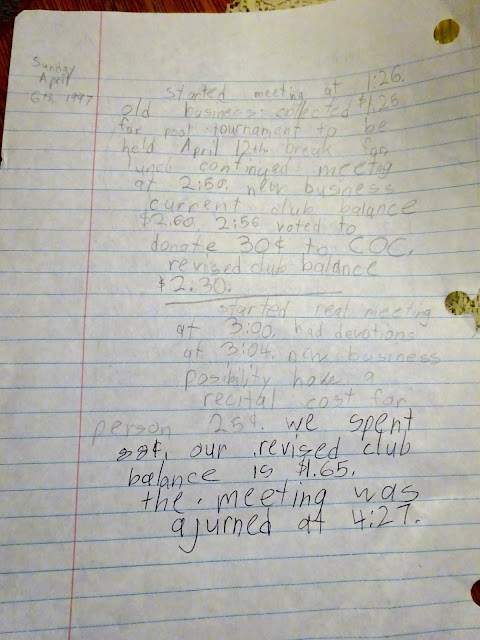 2. Participate in service projects, such as the pool tournament below. This provided our family the service of being able to use their own pool table at a cost of just $.75. 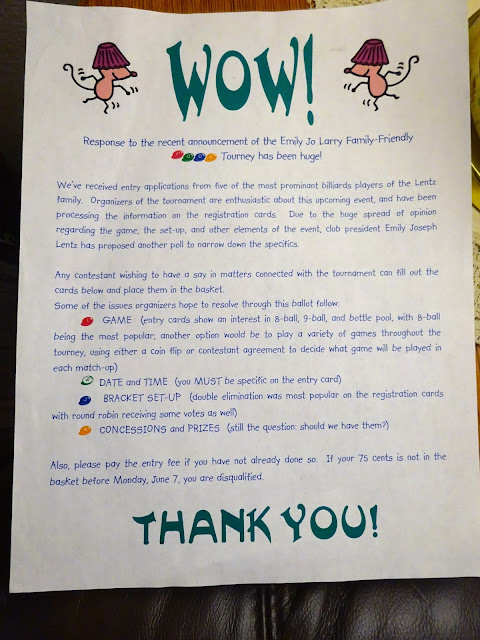 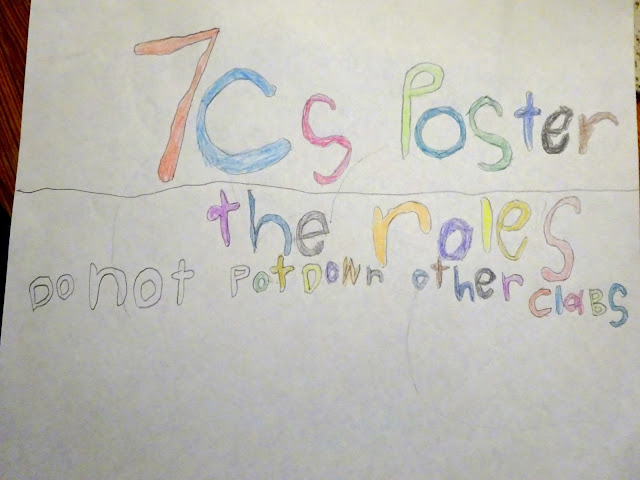 "Do not pot down other clabs."

This was an important rule, because we did indeed have another club in our family: The Compartment of Cleanliness (COC). They served our family primarily by selling us candy at a profit, as well as making an annual vacation video: 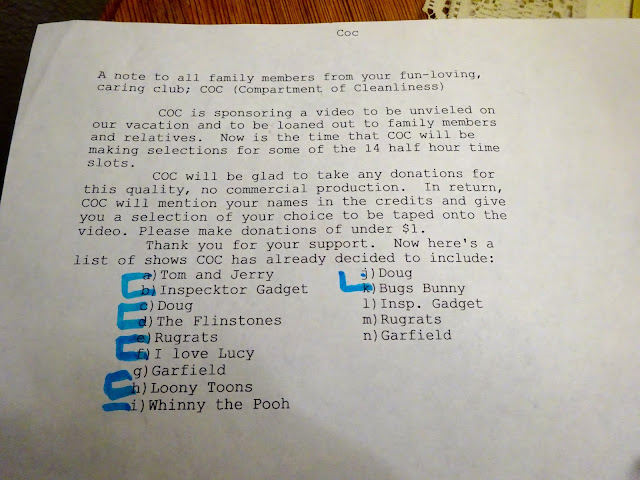 With two clubs and only three siblings, the rivalry was intense. My sister, who was a member of both clubs, got caught in the middle. We found a contract she had to sign for my brother that said, "COC comes first. I agree with my signature."

Apparently, 7Cs had too many rules for young Emily, unlike COC, which only had these: 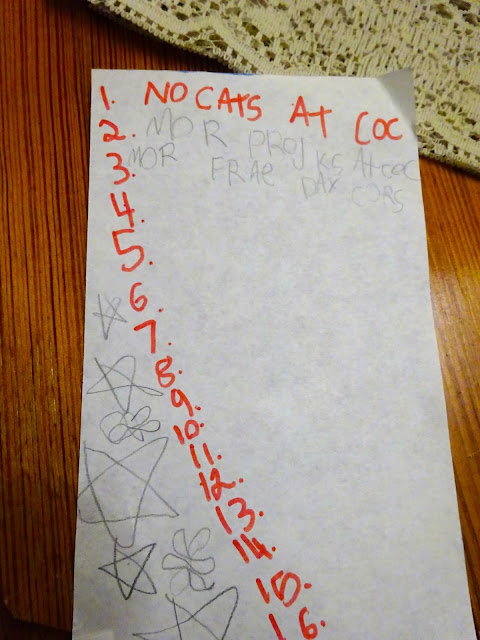 (I can't read those second two either.) So, she left the 7Cs.

Later, she regretted her rash decision: 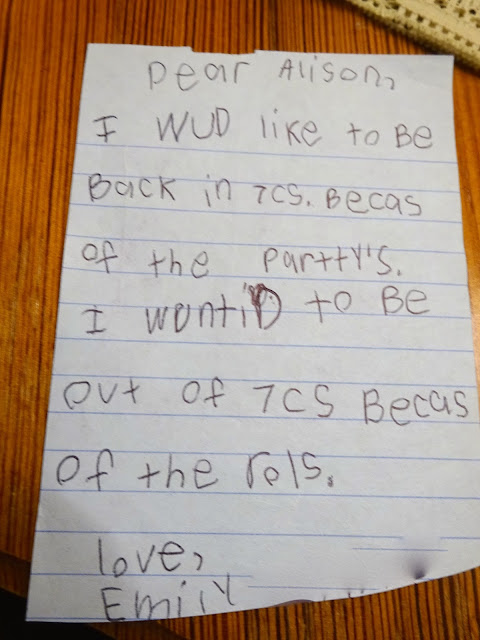 "Dear Alison, I wud like to be back in 7Cs. Becas of the partty's. I wantid to be out of 7Cs becas of the rols. Love, Emily."

Isn't that a sweet, contrite, little note? Here was my response, written on the back: 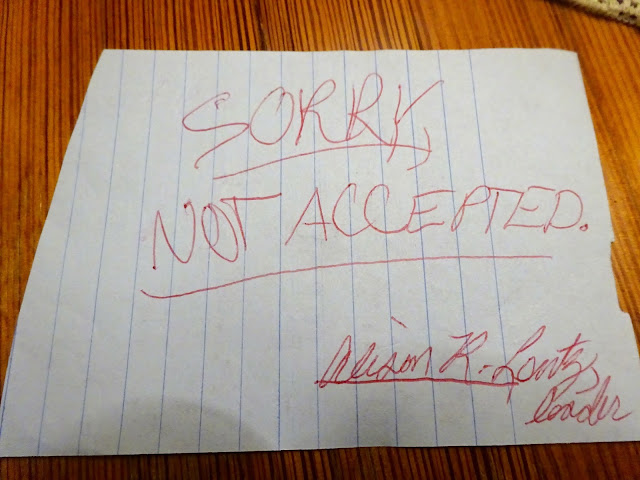 (Sorry, young Emily! If you want to re-join the club again, we can sponsor a pool tourney at Christmas.)
Posted by Alison at 8:46 PM

I always wanted to be a "tall pin" but excluded immediately because I was a girl. Rule #2 said your name must be bob or Jim...strike out #2. Then, I would not eat a spoon of whatever condiments they could mix together. Result: I am not a tall pin and I totally agree with Emily's demand of a club with no ruls. The next generation will have to perfect this!

Linda, we thought of the Tall Pins often while reading these notes. Sounds like they were even more exclusive. I wonder if it's too late for you to try again - maybe if you change your name to JimBob?

I know you are in a real life relationship but the last part of your post made me laugh so loud!! You guys were so weird!!! hahaha.